Inhaltsbaum Medizin open all | close all

Abstract: A new process and system for treatment of blood and/or other body fluids and/or synthetic fluids from a donor to a recipient or storage receptacle or in a recycling system using novel electrically conductive treatment vessels for treating blood and/or other body fluids and/or synthetic fluids with electric field forces of appropriate electric field strength to provide electric current flow through the blood or other body fluids at a magnitude that is biologically compatible but is sufficient to render the bacteria, virus, and/or fungus ineffective to infect normally healthy cells while maintaining the biological usefulness of the blood or other fluids.

For this purpose the low voltage electric potentials applied to the treatment vessel should be of the order of from about 0.2 to 12 volts and should produce current flow densities in the blood or other fluids of from one microampere per square millimeter of electrode area exposed to the fluid being treated to about two milliamperes per square millimeter. Treatment time within this range of parameters may range for a period of time from about one minute to about 12 minutes. 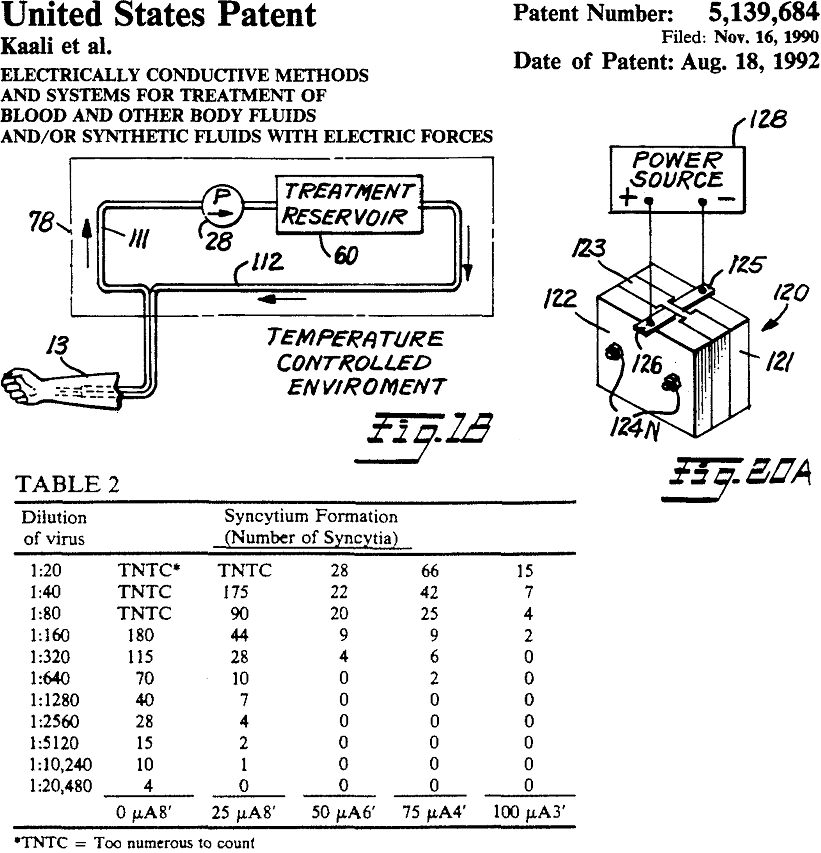 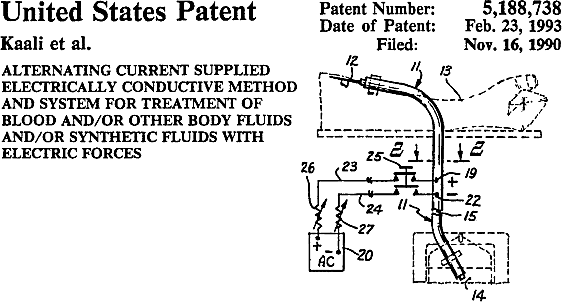 Patent 5139684 on blood electrification describes two systems for passing an electrical current through blood. It claims to kill every bacteria, virus, parasite, and fungus it was tested on. The usual concern about this is whether a patent can be obtained on just about anything and whether the inventors are required to prove the patent actually does what they claim to someone in the patent office. This patent was obtained by Steven Kaali and Peter M. Schwolsky as a result of a study performed at Albert Einstein College of Medicine in New York City. Even so, the concern is still there.

A customer of ours has a friend who has the experience to resolve this concern. Philip M obtained an Electrical Engineering degree with the goal in mind of becoming a patent lawyer. After he graduated from the University of Utah he obtained a job with the U.S. patent office. It wasn't long before he attracted the attention a law firm that specializes in patent law. They offered him a job and also offered to pay his way through law school. Right now he is drawing a salary while still going to school.

Philip was emailed and asked his opinion on this patent. This was his response:

I took a look at the patent in question. You were wondering if the inventors have to prove the patent actually does what they claim to someone in the patent office. Well, yes and no.

The patent laws also require the inventor to set forth his or her invention in claims by "particularly pointing out and distinctly claiming" the invention (112, 2nd paragraph). So, if you want to know what the inventor is protecting with his monopoly right, you look to the claims, which define the intellectual property line or boundary of the invention.

With all patents, there is a presumption of validity in the courts because the patents have undergone the examination process in the Patent Office by an examiner who is trained in that particular "art" or field of invention. That being said, there are patents that slip through the system from time to time. For example, cold fusion received several patents, I believe, all of which were later invalidated. There are no requirements that the invention is commercially viable or useful to the public as a whole-- only that they meet with the standards set forth in Title 35 U.S.C.

While some patents are a little strange, the majority are good, viable inventions for which people want to protect a right to make and use the invention. Maintaining a patent requires a significant investment and most people do not do it frivolously. The patent that you asked me about was a continuation of another application, which means that the inventor paid for at least two applications in order to get the patent granted. He was probably pretty serious about it.